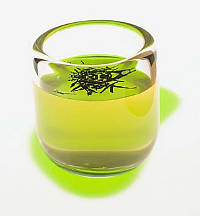 “(NaturalNews) Flu season is now in full swing and seasonal vaccinations are being pushed from every corner. Nonetheless, a recent clinical trial showed that green tea-based supplements reduced the risk of flu by 75%. This is far better than the 60% risk reduction recently reported in the Lancet for vaccinations. Given that green tea provides a host of other health benefits and none of the risks of injections, it would appear to be a far superior alternative to vaccination.

For many years it has been known that green tea polyphenols actively suppress many bacterial, fungal and viral species. On the virus front, green tea suppresses the adenovirus, Epstein-Barr, herpes simplex, HIV-1 and influenza viruses. EGCG, one of the main polyphenols in green tea, is mainly responsible for this suppression. Specifically, ECGC binds to the hemagglutinin of the influenza virus, which blocks it from attaching to (and infecting) target receptor cells. EGCG also alters the virus cell membrane, which further inhibits its ability to infect other cells. Another important component of green tea is the amino acid L-theanine, which has been shown to activate human gamma-delta-T lymphocytes to proliferate and make interferon-gamma, a potent antimicrobial cytokine. These lymphocytes are considered to be the body’s first line of defence against infection. Green tea therefore offers a two-pronged protection from the flu which vaccination simply cannot match. But for final proof, we need clinical trials.

One early trial using green tea against the flu involved gargling three times daily with a weak solution of green tea (50 mg of catechins per cup, of which 60% was EGCG). The theory was that since the throat was a major infection site of influenza, gargling could stop the flu virus there. The theory was right: 1.3% of garglers contracted the flu vs. 10% of the control group. In another more sophisticated trial on 97 healthy adults, a proprietary blend of theanine and green tea polyphenols (apparently worth about 10 cups of green tea per day, but exact amounts were not disclosed) was used for three months during flu season. This trial was randomized, double-blind and placebo controlled. The supplement takers experienced 32% less illnesses and 35% fewer ‘symptom days.’ However, participants were included in the statistical analysis even if their compliance (actually taking the green tea pills) was only 70%.

More recently, a better controlled trial was performed on 198 health care workers. This was randomized, double-blind and placebo controlled: the gold standard in clinical trials. The treatment group was each given a daily dose of 378 mg green tea catechins (containing 270 mg EGCG) and 210 mg of theanine from November 2009 to April 2010. The compliance rate in this trial was better: 93% took their pills according to plan. Those taking the green tea experienced 75% less clinically defined flu infection and this was statistically significant (P=0.022). But not all observed sicknesses were bona fide flu. When laboratory tests were used to confirm real influenza infection, it showed that green tea provided a stunning 83% reduction in flu risk, however this was not statistically significant (P=0.112) due to the small number of actual flu cases.

This latest trial shows that green tea supplements easily outperform flu vaccination for preventing illness. This may be a shocker to most people’s vaccine-indoctrinated mind-set, but for those who already study, understand and practice the principles of natural health, it’s really no surprise at all.”