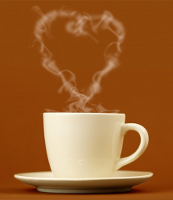 There has been a lot of good news for coffee drinkers of late… and this one is no exception! Coffee can be protective against cancer? Another reason to raise your mug and salute your morning brew!

Coffee Emerges As Protective Against Cancer And Other Diseases

“Starbucks fans around the world can rejoice that their tipple gets the thumbs up yet again. Already shown to protect against a number of diseases, a recent study in the Cancer Epidemiology, Biomarkers & Prevention, a journal of the American Association for Cancer Research, shows coffee drinkers who consumer more than four cups a day with a 25% lower risk of Endometrial Cancer. It is thought that the antioxidant properties in coffee may be a part of the mechanism.

Edward Giovannucci, M.D., Sc.D., professor of nutrition and epidemiology at the Harvard School of Public Health, and a senior researcher on the study, said coffee is starting to be proven as a protective agent in cancers that are linked to obesity, estrogen and insulin.

‘Coffee has already been shown to be protective against diabetes due to its effect on insulin … So we hypothesized that we’d see a reduction in some cancers as well.’

Giovannucci, and his colleagues, including Youjin Je, a doctoral candidate in his lab, looked at endometrial cancer cases in nearly 70,000 women who enrolled in the Nurse’s Health Study. Over 26 years they documented 672 cases of endometrial cancer. More than four cups of coffee was linked with a 25% decrease in risk, while two to three cups had a 7% lower risk.

The results seemed to hold true for decaf as well, with a 22% reduction for more than two cups per day.

Giovannucci said he’d like to see further research on the effects of coffee on cancer, because in this and similar studies, coffee intake is self-selected and not randomized.”