Your Health: Who’s In Charge?

The story of Abraham Cherrix is one of the most amazing, and chilling, that I have heard of. He had two strikes against him in his situation, one, he was 16 years old, technically, a minor, and two, he had the misfortune to have Hodgkin’s disease, a form of cancer that affects the lymph nodes. After going through a regimen of chemotherapy that nearly killed him, he decided he didn’t want a second round of the chemotherapy. 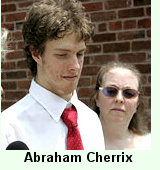 With his parent’s support, Abraham began to educate himself about alternative cancer treatments, telling his oncologist he did not wish to experience any more chemotherapy. This is where it started getting ugly!

The forced poisoning of Abraham Cherrix, the tyranny of modern medicine, and state-sponsored assaults on health freedom

“…the doctor was apparently so enraged by the idea that any patient would not want to submit to his authority that he called the county social services which promptly had the parents arrested and acquired joint custody over the teen. Social services Gestapo members are now in court arguing that the state should force the teen to undergo yet more chemotherapy, as demanded by his doctor. A judge will now decide Abraham’s fate. If the judge orders him back to chemotherapy, Abraham and his family will then become fugitives merely for making their own informed decisions about which type of cancer treatment they wish to pursue. Armed agents will hunt down the family, and Abraham will be effectively forced to undergo chemotherapy at gunpoint. Hence the term, ‘Gunpoint Medicine.'”

This is sad! It illustrates the truth of my “catchphrase” once again… “YOU are the one most responsible for YOUR health!” You should have the right to choose your own health care and treatment. I realize that in this case, this young man is a minor… but his parents are “in his corner” as well. The state shouldn’t be able to come in and force him to do something that has already been illustrated to have harmed him, not helped him! Whether you know it or not, we are in a “battle” to secure our own rights to be free to choose the healthcare that we desire. It should not be forced on us! Unforntunately, according to an AP news release, he lost his court battle:

“NORFOLK, Virginia (AP) â€” A judge ruled Friday (July 21) that a 16-year-old boy fighting to use alternative treatment for his cancer must report to a hospital by Tuesday and accept treatment that doctors deem necessary, the familyâ€™s attorney said. The judge also found that Abraham Cherrixâ€™s parents were neglectful for allowing him to pursue alternative treatment of a sugar-free, organic diet and herbal supplements supervised by a clinic in Mexico, lawyer John Stepanovich said. Jay and Rose Cherrix of Chincoteague on Virginiaâ€™s Eastern Shore must continue to share custody of their son with the Accomack County Department of Social Services, as the judge had previously ordered, Stepanovich said. The parents were devastated by the new order and planned to appeal, the lawyer said.”

Former General Warns of Eroding Healthcare Freedom in the US

There are many efforts afoot to curtail our healthcare freedoms. That is why I try to report here when I find these efforts are gaining ground. I have been aware of the European Union’s Codex Alimentarius for some time, but this article covers it quite well!

“Some of the points made during their interview (of General Stubblebine) are:

– Codex Alimentarius requires that all meats, poultry, fish, fruit and vegetables must be irradiated by Dec. 31, 2009.

– Codex Alimentarius requires that all dairy cattle are to be given Monsanto bovine growth hormone by Dec. 31, 2009.

– Codex Alimentarius reclassifies vitamin and mineral supplements as toxins and dramatically limits their dosage and availability.

– Many nations have already harmonized their laws with Codex Alimentarius making it their de facto law. This has already been approved by the European Union, Australia, New Zealand, Canada, and others.

General Stubblebine remarked, ‘This is a developing situation that every health conscious American should be aware of. The implementation of Codex Alimentarius is quietly going forward without the participation of the American public. Americans need to be involved if they want to insure that the choices they have today are here tomorrow’. Dr. Laibow agrees, she added, ‘Many of the changes that Codex Alimentarius requires are not in our best interest'”.

Protect Your Healthcare Freedoms in NC!

People often ask me what they can do to assure that we have the healthcare freedoms and choices to use complementary and alternative health modalities in North Carolina. Well, I have mentioned the House Bill (1303) that is in study committee right now, before. This bill is critical to assure our personal choice for healthcare remains open in North Carolina. I would strongly encourage you to join the NC Citizens for Healthcare Freedom to support their efforts to pass this bill! Membership is open and costs only $35.00, yet that goes a LONG way toward paying expenses, supporting a lobbyist for the cause, and assuring that our healthcare freedoms are preserved! Please consider joining CHF! I have a link to the membership form below:

I try to keep you informed on Natural Health Freedom issues. Read up on this critical House Bill proposal that would preserve your rights to Natural Health practitioners in North Carolina:

I am working with the Citizens for Healthcare Freedom in North Carolina to try to get this bill passed. It would go a LONG way to preserving our Natural Health rights!

To summarize the bill, practitioners of natural health modalities ranging from naturopathy to bodywork, would be able to practice freely and legally as long as they follow these guidelines.

â€œ . . . Prior to providing such services, disclose to the client in a plainly worded written statement all of the following information:
(1) The practitioner’s name, business address, and telephone number.
(2) That he or she is not a physician, surgeon, or medical doctor, or other licensed health care professional, and that he or she is not licensed, certified, or registered, by the state of North Carolina.
(3) The nature of the health care services to be provided.
(4) The degrees, training, experience, credentials, or other qualifications of the practitioner regarding the health care services being provided.â€?

I like to let you know when “good laws” are suggested to help preserve our health freedoms, but I also want to warn you when BAD bills are introduced! And this one is a “doosy!”

HR3156 Would Restrict Your Freedoms!

H.R. 3156, otherwise known as the “Dietary Supplement Access and Awareness Act,” is being touted as an education bill, but would increase health costs and could deny American health consumers access to some currently-available herbs and non-vitamin dietary supplements.

H.R. 3156 will likely increase the price of popular herbs and dietary supplements like St. Johnâ€™s Wort, saw palmetto, and omega-3 fatty acids by establishing a burdensome and unnecessary set of ingredient and adverse event reporting requirements. There is a link in the article above that you can follow up to fight this bill!

Our freedom to take control of our own health and our ability to use Natural Health alternatives is being eroded over time. This bill would help restore some of our Natural Health options!

Urge your congressmen and women to support this important bill at the national level!